It appears Tolani Baj remains unapologetic about what many have described as a cringe-worthy performance at the recently-aired BBNaija Reunion show. 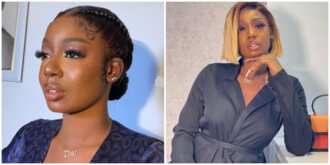 In a clip from her YouTube video, the reality star was seen having a question & answer session with her fans.

One fan asked for her thoughts about people’s opinions of her behaviour at the reunion.

Responding to this, Tolani Baj made it known that she did not care about their perceptions and that even if she had stayed quiet all through the show, she would have still received heat from viewers.

The reality star went on to liken her behaviour to that of American rapper, Cardi B.

Her nonchalant attitude seemed to have put off several internet users, many of whom took to the comment section to blast the Lockdown star.

Check out some comments below:

“Lowbudget mushin cardi B.. My friend shurup. You were loose and razz.”

“Which Internet no contain us ? For your mind you break internet ?lmaoooo joker “

“Only you do interview for your self my gender

“Teebadge na you ask your sef that question. Joro to joro.”

“Tolani is such a pretty girl, I wish she had emotional intelligence to go with it!”

“They do not Care about you too Huntay ‍♀️”