An attendant sold fuel for me at N145 after FG reduced the price, I told him it’s now N125, he said ‘na for television’ – Man narrates - NLvibes
Tweet
Share
Share
Pin

The federal government on Wednesday, March 18 announced the reduction in fuel price from N145 to N125 naira.

The reduction was fixed to take effect nationwide on Saturday, March 21, 2020. But NNPC retail stations had announced that they would begin selling at that amount from the 19th of March.

Following the FG’s new directive, a Nigerian man decided to attempt buying fuel for N145 per litre at a popular filling station however the attendant did not give him the response he expected.

The man simply identified as Olaniyi narrated how he visited the station and ended up buying fuel for N145 then when he told the attendant that the new pump price is N125, he replied ‘Na for television”

“I bought fuel today for 145 per litre at Mobil Filling station Anthony. I told the guy it’s now 125naira, he say na for Television,” he said. 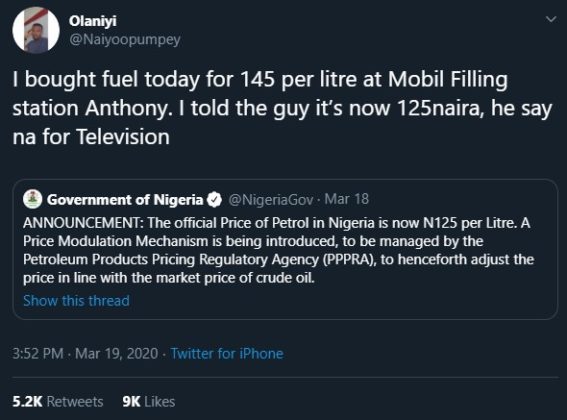